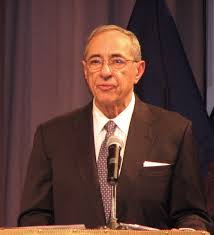 In 2004 I was writing my first major long-form journalism piece, a very ambitious 25,000 word article on the nature of peace, war, the politics of non-violence, and how we think about the use of force in society. It would be called “Is God a Pacifist?” and I managed to interview just about every expert I could on the issue. I even wrote a long request to former NY Governor, Mario Cuomo, to ask if I could interview him about the issues involved. I had heard he was a fan of Pierre Teilhard de Chardin, and wanted to speak to him about the moral issues involved with an eye toward Teilhard’s work. A long shot but what the heck….I wrote a long email. Heard nothing. A month later, I was deep in writing, and I received an email. It was Mario Cuomo himself, apologizing that his assistant had not forwarded him the email (or something like that) and yes, he would very much like to talk about the subject. I was thrilled. We setup an interview and I got to speak with Cuomo for about 30 minutes on Teilhard, cultural evolution, war and peace, ethics, religion, God. He was passionate, informed, engaging, theologically interesting, charismatic. What a treat; what an honor. A real highlight of my early career as a writer and journalist. RIP Mario Cuomo. A remarkable man, and a deep, beautiful, thoughtful, compassionate soul.

You can read an excerpt of that interview with Cuomo here.

Powerful photo of RBG’s former law clerks waiting for her casket to arrive at the Supreme Court yesterday morning.

This week I'm talking with @carter_phipps about principles and mindsets for value-based leadership. Join us: http://ow.ly/Olc950Bzj0L

"Conscious Leadership defines a path forward for all of us looking to lead the way.”—Mark Cuban, owner of the Dallas Mavericks

Thank you @mcuban for your generous endorsement!

Conscious Leadership on Inc.'s "What I Know"

'John Mackey: The Delicate Balance of Purpose and Profit' by What I Know https://megaphone.link/MANV3813827866

Good to see our new book featured on the @jaltucher show!